In the year of Gary Gilmore, Elvis Presley is dead. Stevie Wonder releases “Songs in the Key of Life”. And a young man named Cronic sets out on a relentless killing spree across the American Midwest. He is mamma-bound, driving a cherry red T-bird to California to find the mother who abandoned him when he was still a kitten.

The novel begins with a fifteen-year-old boy who discovers that murder is the best medicine for his chronic stomach pains. To those who think they know him, his name is Cronic. Orphaned as a child, he can’t remember who he is. But he’s regressing to a simpler time, a childhood filled with memories of being a cat named Charlie Kitten.

In rural Pennsylvania, he becomes mesmerized by the roadside graffiti of an artist who tags his work “Albagon”, a college dropout named Scoobie St. Lawrence. Once a promising running-back for Ohio State, Scoobie has become a drifter with his paint cans and no more sense of purpose than Cronic.

Held hostage by Cronic, Scoobie is an unwilling accomplice to the young boy’s emotional and psychological disintegration. And Cronic, torn between wanting to recapture his brief time of happiness as his mother’s pet and his need to become unforgettable, resolves to destroy anyone in his path.

Together, they travel from Alliance, Ohio to the Wyoming border in a marathon journey of self-discovery and brutality, a ride filled with disturbing revelations for both. 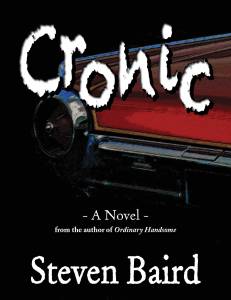 6 thoughts on “Cronic: A synopsis”